Anya Verkhovskaya founded A.B. Data in 2001 and has watched her company gain recognition for its stellar products and services. A.B. Data is an international firm that offers a full range of class action and complex litigation support services, with offices in New York, Washington D.C., Chicago, West Palm Beach, Fla., San Francisco, and Milwaukee. It is the fastest growing company in the class action administration industry, with more than $2.5 billion of settlements currently in various stages of management. As a partner and the COO, Ms. Verkhovskaya is responsible for overseeing all aspects of A.B. Data’s class action administration and complex projects, and leading a team of legal, finance, information systems, information technology, claims administration, administrative, facilities, business development and operations professionals.

Through her work, Ms. Verkhovskaya has led the efforts that searched and found more than 43,000 Romani survivors in 17 countries of central and Eastern Europe who were potentially eligible for humanitarian aid. Ms. Verkhovskaya also played a role in the Holocaust Victim Assets Litigation case that settled for $1.25 billion, and consulted with the International Commission on the Holocaust Era Insurance Claims on outreach strategies.

Ms. Verkhovskaya has held various executive positions throughout her illustrious career and was eventually approached by several judges to take on her current position. Prior to joining A.B. Data, she served as a consultant and the head of the Eastern European and Middle Asian operations for Survivors of the Shoah Visual History Foundation, which was founded by Steven Spielberg. During her seven-year tenure with the company, Ms. Verkhovskaya became well-versed in community outreach and building a strong network.

Her passion for achieving justice and working with families has enabled her to achieve great success throughout her career. She looks to continue working in her field and assisting those who seek her help. 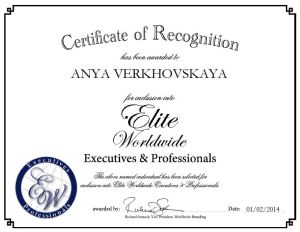