Christopher Potter has been involved in music since he was a child. He started playing violin at the age of 7. After moving to Australia, he realized that there was not much of a market for musicians, so he moved into the production side of theater and started working on the musical set of Hair. Ever since then, he has experienced a terrific ride through the production, mechanical, technical side of the industry. In his current role, Mr. Potter is responsible for helping Opera Australia in enriching Australia’s cultural life with exceptional opera, and presenting opera that excites audiences and sustains and develops the art form nationally.

Mr. Potter possesses more than 45 years of technical production experience, helping Australia’s largest and busiest performing arts organization with more than 600 opera performances a year, including two main stage opera seasons in Sydney and Melbourne and a range of other activities, such as opera concerts and free outdoor performances in Sydney’s Domain and Melbourne’s Myer Music Bowl. For his exceptional work, Mr. Potter earned the Richard Owens Award for Technical Achievement in 1992.

He attributes his success to his hard work, long hours, and his passion and enjoyment for his work. In the coming years, Mr. Potter plans to work with more international theater companies and to advise them on the technical aspects of production, as well as teach and mentor younger professionals starting out in the industry. 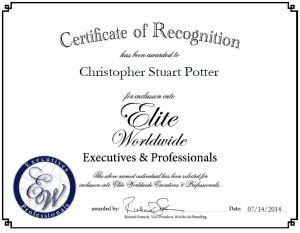