Inspired by his father, Martin Paquet followed in his footsteps and established a career in the rubber recycling industry. Mr. Paquet has been recycling rubber buffings since 1991 in the U.S. and Canada. He has been in the industry since 1983, and has built his own filtering system that significantly reduces the number of particles that are released in the atmosphere. He worked with his father’s company and then the two of them decided to partner and start Lavokika 2000 Inc. They worked together building up the company until 2008 when Mr. Paquet’s father retired, leaving him as the sole owner.

Lavokika 2000 Inc. has gained a reputation as a premier rubber recycling company under Mr. Paquet’s leadership. It provides eco-friendly filtration systems, recycling of rubber buffings, and cleaner ways to dispose of waste rubber. An expert at finding the right equipment for each location, Mr. Paquet is responsible for maintaining ongoing interactions with existing clients and suppliers, handling strategic planning, developing new business, and improving systems, such as eco-friendly filtering systems. Mr. Paquet has achieved great success throughout his 29-year career due to his desire to better the industry and clean up the environment. He also strongly believes that he offers better products and services than his competitors. In the future, he intends to continue progressing in the industry, while staying ahead of inevitable changes. 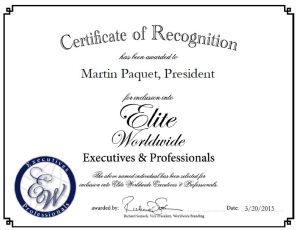