Hilda Lunderstedt is one of the few South African female entrepreneurs who was able to achieve success from the beginning. She took a self-started business to a nine-figure company in less than 10 years and sold it to a major pharmaceutical company in South Africa. Over the years, Ms. Lunderstedt has become more focused on building and expanding businesses, and working with entrepreneurs who are eager to make a name for themselves on a global scale.

Ms Lunderstedt is excited about business opportunities that will build successful entrepreneurs and she strives to create success within the communities which these entrepreneurial businesses serve. She is a devoted advocate and ambassador for women in the business arena and has a strong belief in the potential that lies within each and every woman to succeed. Seen as a role model and business leader, Ms. Lunderstedt spends her days setting and steering the vision and future of the Lunderstedt Group, reviewing business opportunities to grow investment portfolio, actively participating and contributing to meetings of companies in which interests are held, and reviewing these companies’ strategies and seek growth opportunities.

Due to her tremendous success and stellar reputation in business, Ms Lunderstedt has shared stages with icons such as Mark Zuckerberg (Facebook), Jack Welch (General Electric CEO), and Steve Wozniak (Apple co-founder). In March 2014, Ms Lunderstedt spent a week with Sir Richard Branson on Necker Island, as part of the Reimagining the Future of our Planet Leadership Group, strategizing and reengineering the business world as we know it, in order to ensure the future of our planet. Additionally, Ms. Lunderstedt has received numerous awards for her work. Wealth Migrate/IPS International named her Most Successful Female Investor, she won The JT Foxx Organization’s Top Entrepreneur award, and she earned the SAP Go4Growth JSE Listing Award for Most Promising and High Growth Company. She attributes her success to hard work, passion and perseverance, and to never accepting no as the final answer. Moving forward, Ms Lunderstedt hopes to be instrumental in bettering society and expanding her company to work with more people. 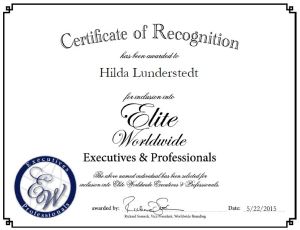