Sylvain Guilbert, vice president and chief information officer of Echelon Insurance, recalls that he became involved in computer science because he was “born in technology.” He received a college degree in computer science and later found his true calling as a developer. With more than 30 years of professional experience under his belt, he has continued to grow with the field, earning a Project Management Professional Certification from the Project Management Institute in 2005 and a Master’s Certificate in Project Management from Laval University and York University in 2004.

At Echelon Insurance, Mr. Guilbert is in charge of strategizing, and is responsible for security, business continuation plans, long-term strategies, disaster recovery, and data confidentiality and privacy. He is a recognized expert in project management and building IT teams from scratch, as well as planning, executing and controlling projects.

At the present moment, Mr. Guilbert is reaching the end of a seven-year plan, and plans to conquer new challenges in years to come, which may include joining a startup company. He attributes his success to his team, and finds fulfillment in working with like-minded individuals in an environment that supports the business. 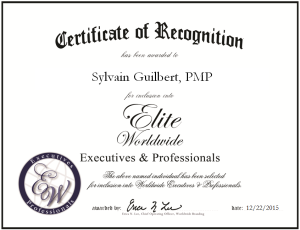