Noted for his expertise in building strong business relationships based on trust, values and principles, Mr. Bhakta has excelled in the freight and courier sector for nearly two decades. Upon receiving a bachelor’s degree in accounting and finance from the Manchester Metropolitan University in 1992, he immediately set to work, starting in the securities trading industry in the Africa region. He later transitioned to a position with One World Express Inc. Ltd, where he now serves as the managing director. In just a few short years, he successfully learned the ins and outs of the business, and bought the company from its original owner. Since then, the company has continued to thrive under his leadership.

Based in the United Kingdom, One World Express Inc. Ltd, is best known for providing freight and courier services, which includes delivery, as well as export and import. In his current position, Mr. Bhakta oversees the day-to-day business operations and actively works to drive business for the company. As he moves forward with his career, Mr. Bhakta has some ambitious plans for the future. He hopes to continue growing the company to a level where it can be sold and acquired by a high profile company capable of utilizing it for its logistical purposes. Once he feels the company is in good hands, he would be free to move into another exciting new business venture. 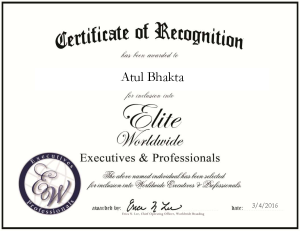